Nubian filmmaker Hafsa Amberkab is reclaiming the power of narrative by connecting younger generations to their language and culture that was lost in their drowned ancestral land.

In the opening lines of a forgotten song called Mshkomsy, 70-year-old Haseeba is transported back to her childhood on the banks of the Nile in southern Egypt. Two hundred kilometres north of her drowned ancestral land, Haseeba’s daughter Hafsa has asked her to sing something in Kenzi (also known as Mattokki) – one of two Nubian languages spoken in Egypt along with Fadicca – and from somewhere deep in her memory, Haseeba extracts part of the song she loved when she was young.

“I watch the boat come from afar, sails and flags rippling in the air. Where could I ever find another? I miss Nubia, I miss the mountains of Nubia,” the septuagenarian translates the only lines she remembers from an unrecorded song by Nubian artist Abdo El Saghirfor her daughter, filmmaker and organiser Hafsa Amberkab, whose chosen surname honours her family’s ancestral home: the village of Amberkab. In 2019, Amberkab was making her first documentary exploring her Nubian heritage. Though she thought herself fluent in Kenzi, she didn’t know her native tongue had a word for ‘I miss’: mshkomsy.

When Haseeba was a young girl in the 1950s, Amberkab was still a few years away from being flooded by the construction of the Aswan High Dam in 1964, which resulted in tens of thousands of people displaced, and 44 Nubian villages submerged behind the mammoth megaproject.

Indigenous to southern Egypt and northern Sudan, Nubians of the eastern Sahara have been closely connected to Egypt for millennia. The Twenty-Fifth Dynasty, for instance, consisted of Nubian pharaohs from the Kingdom of Kush who ruled Ancient Egypt in the 7th Century BCE. Though the foundation of modern Egypt included the area known as Lower Nubia, the ethno-linguistic group, which now mainly lives north of Lake Nasser (called Lake Nubia south of the Sudanese border), is historically and culturally distinct from other communities in Egypt.

For thousands of years, the connection to the Nile was central to Nubian civilisation and culture – though rituals, ceremonies, music and economy – until 1964, when most villages, including Amberkab, were resettled into the government project Nasr El-Nuba, in the land-bound desert near Kom Ombo, 70km northeast of the High Dam. The initial relocation also led to thousands leaving for big cities like Cairo, Alexandria and Suez in search of opportunities. Others immigrated out of the country, creating diaspora communities in the Gulf countries, North America, Europe and Australia. Known colloquially as “Nubian”, both Kenzi/Mattokki and Fadicca, which is also spoken in northern Sudan, have fallen into relative disuse as people dispersed and intermingled with non-Nubian communities. 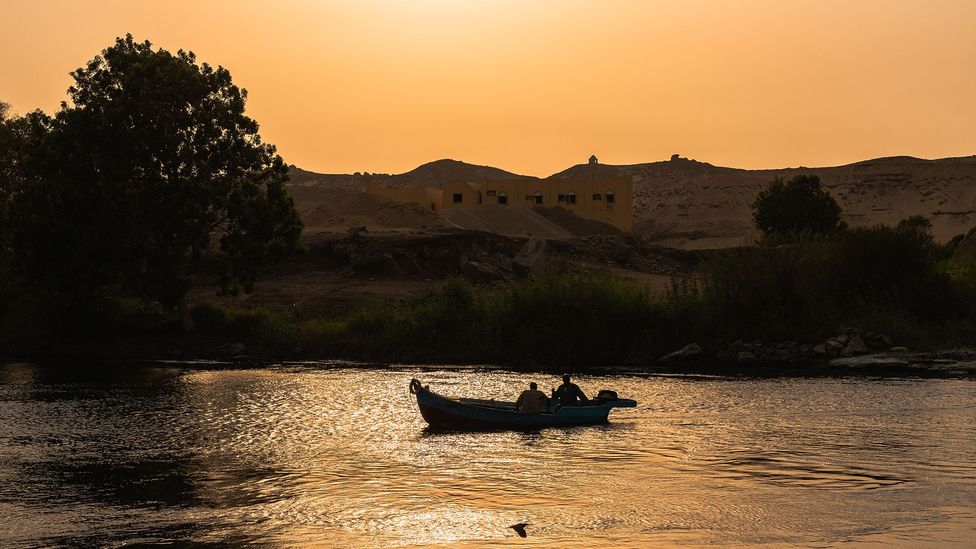 For thousands of years, the connection to the Nile was central to Nubian civilisation and culture (Credit: Mai Farouk)

In Nasr El-Nuba, stories of ancestral lands like Haseeba’s are cherished by an aging generation, who hold a tighter grasp on the language, despite being completely disconnected from the Nile. Conversely, those closer to the city of Aswan, 50km to the south, who still live by the river and work in tourism have kept some Nubian customs alive by marketing them as touristic experiences. (The Nile crocodile, a culturally significant symbol of strength, can be seen in shallow pits in many Nubian guesthouses.)

The word “mshkomsy”, and Amberkab’s ignorance of it, is emblematic of the state of Nubian languages today: even those that do speak them often have glaring gaps in their knowledge.

“The more songs my mother sang, the more we explored, and the more we realised I didn’t know,” Amberkab recalled. Camera in hand, the young filmmaker set out on an odyssey to find all she didn’t know about her home and heritage and share it with the next generation of Nubian youth through Koma Waidi, an Aswan-based education initiative focused on workshops and heritage documentation, which means “tales of the past” in Kenzi.

I met Amberkab on the sun-baked roof of a guesthouse on Elephantine Island, a two-minute boat ride across from Aswan. We took respite from the heat, watched the boats pass over the shimmering river, and contemplated the fear and wonder of crocodile taxidermy – strewn about the owner’s collection of antiques lay 3m-long stuffed and mounted crocodiles. Above them, display shelves held delicate wooden carvings of traditional Nubian houses, a cabinet housed vintage 16mm cameras and British pocket-watches, and a wall was piled high with traditional clay pots, old wooden containers and a few mass-produced souvenirs.

Amberkab was deep in conversation with 13-year-old Koma Waidi participants Samaa Merghany and Doha Tarek, who had joined us to talk about their experience learning to make documentaries about their heritage. Picking up item after item from the guesthouse’s shelves behind her, Amberkab taught the teenagers about the old barter economy, marriage rituals and how to make traditional kohl, the eyeliner prevalent in cultures across the Middle East, South Asia and parts of Africa. 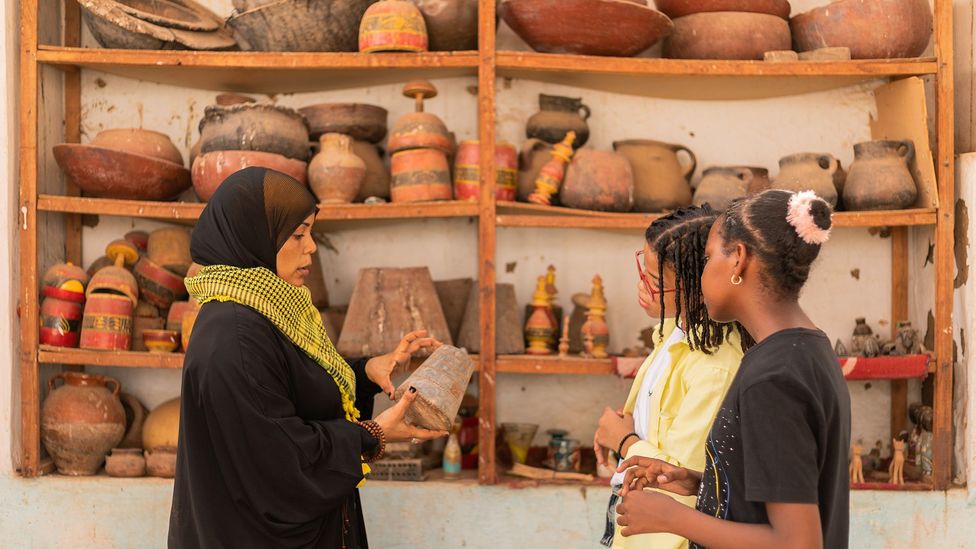 The whole conversation took place in Arabic, not Kenzi, which none of the girls – Samaa, Doha or 18-year-old Koma Waidi volunteer Shahd El-Rawy – speak. “Here on the island, because we’re so close to the city, we’re very assimilated,” explained El-Rawy. “Our parents and grandparents speak the language, but the new generation usually only understands it.”

This language gap is due to displacement, cultural marginalisation and, according to Amberkab and the three students, a perceived correlation between assimilation and career success. Amberkab also explained that parents don’t want their children to be made fun of at school for being different, especially if they already have Nubian features, which tend to include a darker complexion than the average Egyptian, already marking them as “other” in a prevalent anti-black society.

If I could go back in time, knowing why he didn’t want to teach me, I would defend my right to learn

As the only Nubian family in an Arabic-speaking neighbourhood and school, Merghany’s father didn’t want her to be outcast, but now the teenager is resolved to embrace her identity.

“It’s who I am, how could I not know something like that?” Merghany exclaimed in a shy but resolute tone. “It’s my language, it should be my mother tongue. If I could go back in time, knowing why he didn’t want to teach me, I would defend my right to learn. I wouldn’t ever let anyone make fun of me.”

Walking around Elephantine Island, as we spoke of agricultural lands long gone and submerged Nubian mountains only visible by their summits, we never steered far from the Nile. But today, according to Amberkab, only nine Nubian villages remain on the banks of the river, and the most robust experience of Nubian culture for outsiders is around Aswan.

In the popular Nubian village Gharb Suhail, a 30-minute boat ride south-west of Aswan, brightly-coloured houses market authentic homestays, owners advertise crocodile visits and bustling markets overflow with piles of spices against the hotels and lodges that bear Nubian names. During the high season from October to March, restaurants and guesthouses will host live music and dance performances, where local bands perform Nubian folk music. Much of what is on display isn’t truly representative of Nubian culture, but rather the fulfilment of what tourists expect to see, including long-held Egyptian stereotypes of the smiling, singing, good-natured Nubian, a trope El-Rawy tells me the young generation is exceedingly tired of. 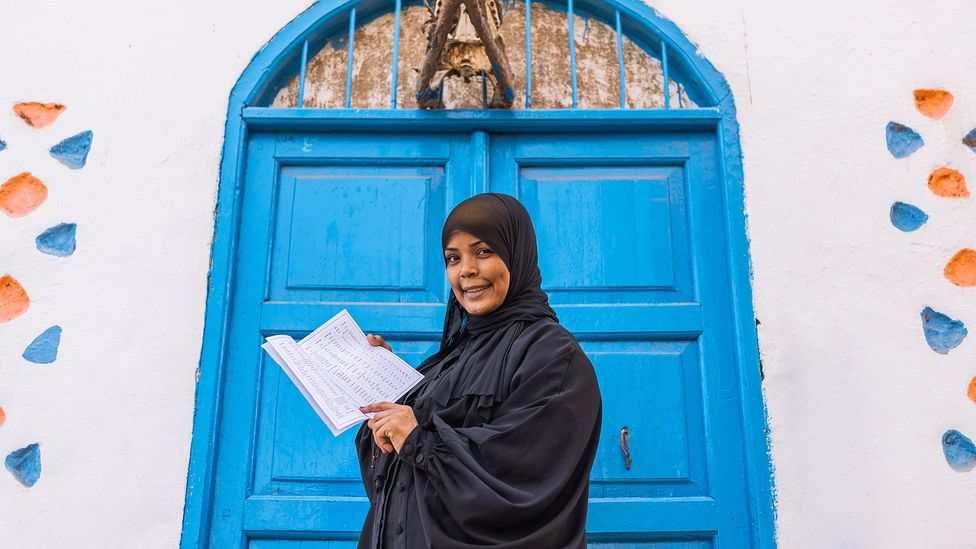 Amberkab’s aim is to go beyond these tired tropes, both by reclaiming the power of narrative through filmmaking and by providing younger generations with points of connection to their Nubian culture.

Since 2018, Koma Waidi has organised the annual Guardians of the Nile festival, centred around this affinity with the river, where Nubian children learn about and race modern versions of traditional gereidy boats through the same waters that their ancestors paddled through.

Perhaps her most impactful activity has been a documentary film festival, where Amberkab brought in filmmakers from around Egypt to teach Nubian teenagers how to make documentaries about their heritage. The winning film, Ano (“grandfather” in Kenzi) by Merghany and Tarek’s team, features a young Nubian girl who discovers an old photo album. Curious, she goes down to the docks to ask her grandfather and his fellow boatmen about their community’s history of sailing the Nile.

Merghany and Tarek beam as they showed me the film, and it was easy to see how the pair – along with the rest of their filmmaking teenage cohort – can usher in a new generation of Nubian filmmakers. For Amberkab, this is integral to her mission.

I can’t possibly document everything myself

“I can’t possibly document everything myself,” said Amberkab. “Even with 20 people, I could never know a fraction of the stories that can be told about Nubia. But when we invest in a generation or two like this one, they won’t need me. Every one of their phones turns into a camera.”

In his book The Nubian Language: How We Write It, Dr Mukhtar Khalil Kabbara – who pioneered modern Nubian orthography, and passed just before the book’s publication – leaves an intangible will for those that succeed him. “It is the duty of those that care for Nubian heritage, the sons and daughters of Nubia as well as others who are interested, to preserve this valuable and endangered heritage for humanity,” he wrote. “This is the imperative responsibility that rests on the shoulders of the next generations, for the next generations, in Nubia.”

It’s Amberkab’s generation that Kabbara refers to, who are now carrying the torch for those that will succeed her in turn. The filmmaker is part of a generation of Nubian advocates, organisers, artists and researchers who are documenting, reviving and celebrating their home and heritage. 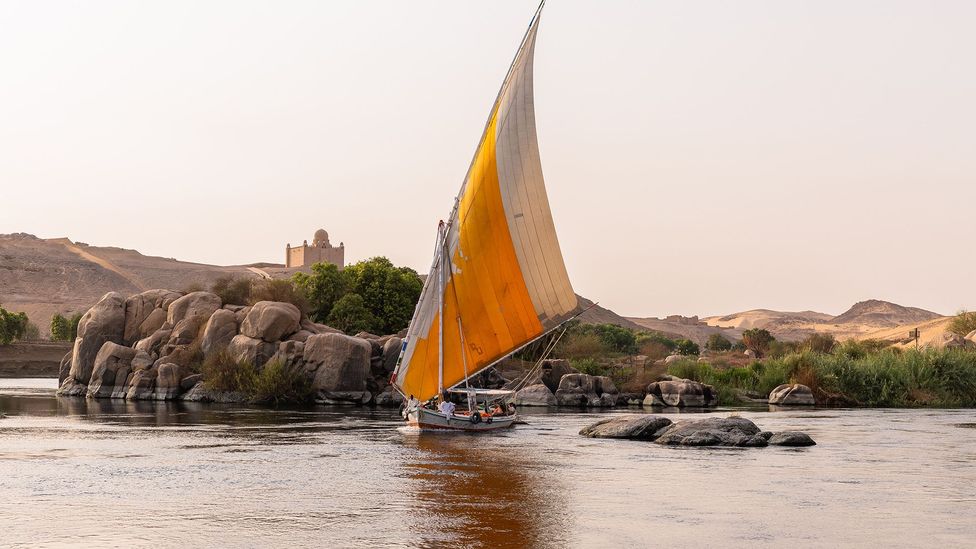 “We try to correct misconceptions about Nubians and Nubia that are unfortunately very common,” said Mohamed Kamal, founder of Nubian Geographic, a virtual museum on Nubian culture. “It’s on us to address media misrepresentation, and offer our own perspectives on our own heritage, instead of others doing it for us.” What started for Kamal as a Facebook page in 2015 has since expanded into research coordination, outreach and on-ground programming. In 2018, they launched Nubian Heritage Month, which is commemorated every year in July by a large network of social media users, institutions and initiatives dedicated to Nubian heritage conservation and revival.

Some, like Amberkab, are barely 100km away from their ancestral land. Others, like software programmer Momen Talosh, who developed the mobile application Nubi as a way for tech-savvy Nubian children to learn their language, are in cities like Alexandria, where displaced Nubians relocated in search of opportunities. And still others, like the team behind London-based Taras Press’ upcoming collection of four illustrated children’s books promoting Old Nubian script and preserving Nubian visual culture, are strewn halfway across the world, but intimately connected to memories and dreams of home.

An hour’s drive away from her ancestral home, Amberkab now only speaks to her mother in Kenzi. Her grasp on the language and its history, which has been steadily deepening over the years, is such that she spent a full five minutes explaining the layers of meaning behind the single verse that started her odyssey.

Amberkab tracked down singer Abdo El-Saghir in Alexandria to learn the rest of the song. The flags mentioned in it are actually tarrada, a fringed piece of fabric woven by Nubian sailors to mark their boats, which El-Saghir imagines hitting windows in the houses of his childhood as they pass, carried by the strong unimpeded wind, as dabes – a freshwater fish native to the area – jump through the shallow waters.

“Where could I ever find another like this? I miss it,” sung Amberkab, with both nostalgia and hope in a remembered song.