Once upon a time, before World War II, there lived a photographer who had a studio across the Chung Thye Phin Building in Ipoh, Perak. He mingled with the locals, took their photographs, asked about their families and got to know everything about everyone.

What no one knew then was that this photographer was a spy who was tasked to gather information for the Japanese Army Intelligence.

How convincing was his disguise? What intel did he gather? Were any of his friendships genuine?

This prominent tin miner, who is known as the “last Kapitan Cina of Perak and Malaya”, used this space as his headquarters and trading house.

“This building was one of the most photographed picture-postcard landmarks in its golden years. By fate and chance, this inspiring 116-year-old built heritage survived the times and we found her. In view of its rich historical legacy, we undertook eight years of building preservation and conservation works to restore it to its former glory,” says founder and owner Michael Chan.

This project is a labour of love for husband and wife team Chan and Arlene Loke, born out of their love, passion and appreciation for the rich heritage and history of Ipoh and Perak during the golden years of the Tin era of Malaya.

As part of the restored headquarters’ adaptive reuse activities, they designed and put together Made In Ipoh, an immersive history and heritage edutainment (educational and entertainment) gallery-museum that showcases the stories, life and legacy of the last Kapitan Of Malaya and “Ipoh – The City That Tin Built”. A section of the Made In Ipoh gallery-museum featuring vintage pedal cars, tin-toys and games.

It occupies the entire Phin Kee Chan building, which has a total built-up area of 669sq m.

The total exhibition space of the gallery-museum (floors and walls) is approximately 1,858sq m.

“Our showcase covers a two-century period of historical-heritage legacies. We shall bring our visitors back in time to reminisce, relive and engage with Nanyang-Malaya, the land of opportunities, rich with natural resources in the eyes of immigrants, indentured laborers and officers who came for trade and commerce. These ‘great tin stories of Malaya’ are to be envied, admired and shared with the world,” says Chan.

A space for your Insta

Made In Ipoh adopts an immersive concept where visitors can interact and immerse themselves with the numerous set-ups around the space.

There are lots of Instagram-able spots you can get creative with.

For instance, sit at the Kapitan’s working desk. On it is a vintage cheque writer, a marble sculpture tray, an abacus, phone and an English boater hat like the one he wore, as depicted in the Phin Kee Chan currency. In 1918, the Kapitan was authorised and permitted by the British government to print and issue 10-cent notes for circulation. 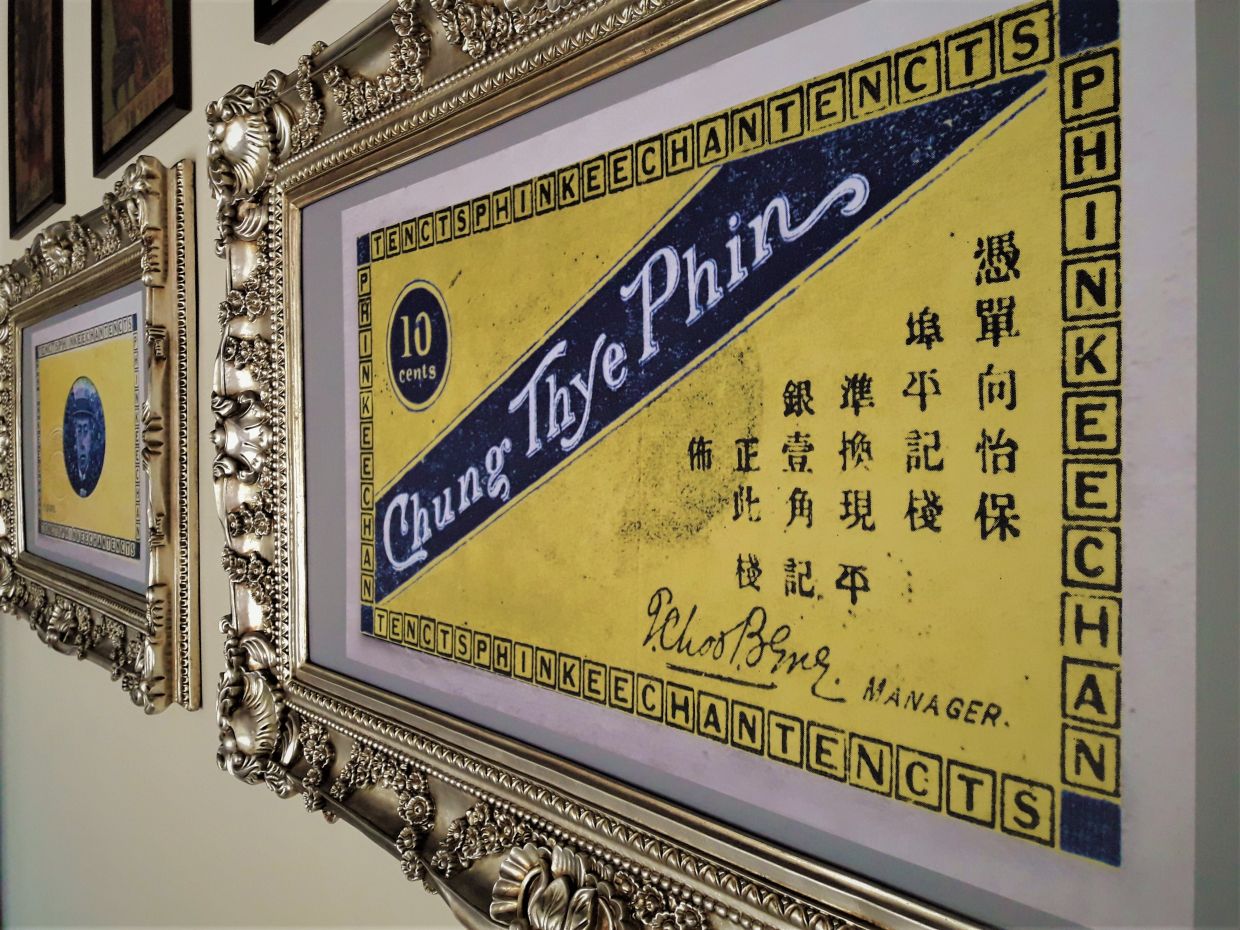 The Kapitan was permitted to print and issue 10-cent notes for circulation in 1918.

Or you could pose with the two life-size fighters in a 3D illustration of the battlefields of the Larut Wars. The Larut Wars is a series of four wars that ended with the signing of the Pangkor Treaty of 1874.

Then, perhaps kick back in a sturdy vintage optical chair, obtained from Star Optical, the shop of one the oldest qualified optometrist and ophthalmologist in town, who was spared his life by the Japanese army.

One of the attractions in Made In Ipoh is its three-storey high, fully restored 116-year-old Victorian cast iron spiral staircase in Phin Kee Chan.

Visitors to the gallery-museum are permitted to take photographs with the staircase on its landing sections.

“This is an ornate Victorian-era spiral staircase with charming and intricate posts, columns, treads, risers, guards and balusters crafted with the stylised fleur-de-lis (lily) design, the favourite mark of Kapitan Chung. He commissioned this majestic staircase from Walter Macfarlane & Co, his favourite place to shop for European ironworks. Made In Ipoh obtained the optical equipment and optical chair from Star Optical when the business closed down about a decade ago.

“Also known as the Saracen Foundry, this was the world’s most important manufacturer of ornamental ironwork in Scotland. All the components of this staircase were shipped from its foundry in Glasgow in Scotland to Ipoh in Malaya to be built on-site by a team of Scottish installers and engineers.

“It has been hidden from the public eye for over a century, but now has been fully restored and is made available for the public to admire and appreciate,” says Chan.

These are just a few of the highlights available at Made in Ipoh.

Besides these installations, there are many vintage trinkets and items that are on display in the space, like winding tin toys, pedal cars, games of yesteryear, posters, old photographs and illustrations, traditional medicine containers, crockery, the gramophone and other nostalgic music players and instruments that will bring you back in time to an era without electricity.

The Phin Kee Chan trade signboard, restored and crafted by Sifu Chow, the last traditional signboard maker in Ipoh, is also on exhibit here. The characters and text on the signboard is crafted with real gold leaf. And that Japanese spy mentioned earlier? There is another realistic 3D illustration mounted on the wall, showing him behind a camera in the Mikasa & Co photo studio. Visitors can engage with this set-up by standing “in front” of the camera, just like people did to get their photo taken by photographer-spy Masaji Fukabori in the Mikasa & Co photo studio.

“Our gallery-museum exhibits and presentations span from around 1821 to 2021. Over the years, we scoured antique shops and flea markets to uncover hidden gems that we added to this collection. We also have interesting items we obtained from friends and family.

“The exhibition has been specially curated to bring you back in time… a walk down memory lane, experience and revel in the historical-heritage events, artefacts, exhibits, illustrations, music and multimedia presentations, lifestyles and memories of the old days,” says Chan.

Made In Ipoh and Phin Kee Chan opened its door to the public with its first private group guided tours in August last year, during the recovery control movement order period. But like other museums and galleries, they had to close shortly after, due to pandemic restrictions.

There will be an official launch once they are allowed to resume operations, with updated SOP, reduced visitor capacity and public health guidelines observed.