TAIPEI : Taiwan’s prosecutors have appealed for information on the construction site near Friday’s (April 2) deadly train crash as photos emerged showing the main suspect arrested in connection with the accident looking on as victims scrambled to safety from a tunnel.

The suspect apparently knew by then that a truck he owned had caused the tragedy.

Over the weekend, survivors of the Taroko Express 408 accident in Hualien released photos of Lee Yi-hsiang standing near the wrecked train as paramedics and firefighters struggled to help survivors.

The photos triggered outrage among the families of victims and the public.

Lee, in the meantime, was re-arrested and hauled back to the Hualien District Court after a judge on Sunday ruled in favour of the prosecution’s appeal against his NT$500,000 (S$23,560) bail, deeming him a flight risk. The court ruled that he be held for two months as the authorities also worked to seize his assets.

In 2019, Lee, a 49 year-old construction company owner, was appointed the construction director of the Six-year Railway Safety Improvement Project on a site located just a mere 20m above where the train crash occurred. 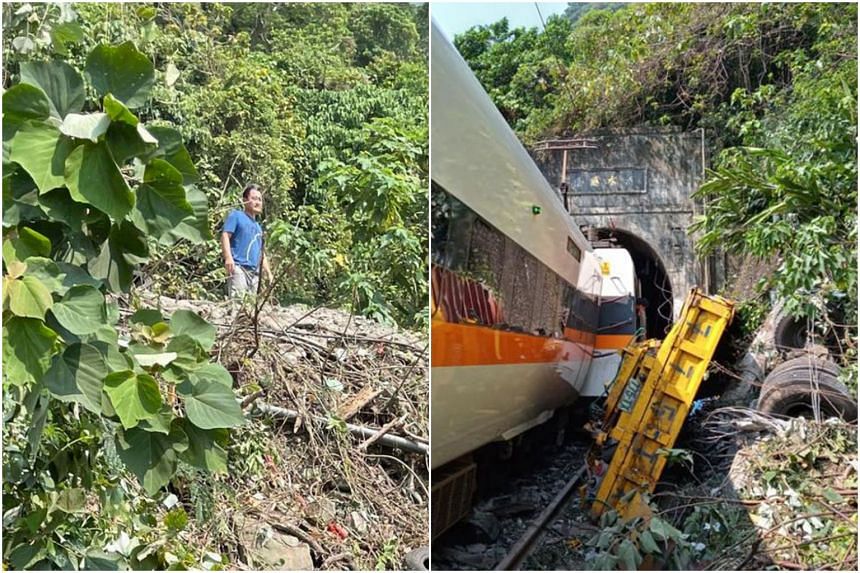 A photo taken by a passenger shows Lee Yi-hsiang (left), the main suspect of the crash, near the site.PHOTOS: PTT/LEEABC, FACEBOOK

Aside from being the site manager, he is also the owner of one of the contractors involved in the project, which is a violation of Taiwan’s Construction Industry Act.

The Taiwan Railways Administration (TRA), which commissioned the project, missed the fact that Mr Lee was holding two posts, one of which went against the law.

The Six-year Railway Safety Improvement Project was meant to prevent rocks on nearby mountains from falling onto the train tracks.

Lee has run afoul of the law previously.

In 2015, the contractor was charged with corruption after the authorities discovered a doctored photo of a bridge pier project that he was in charge of. He had instructed an employee to digitally edit the photo, allegedly to show more progress in the construction than actually completed.

Over the weekend, survivors who were located in the last train carriage, which suffered the least impact from the crash, sent photos they took to the Apple Daily newspaper.

The photos showed Lee standing a few metres away on a hill, looking down at the train, with a few other men in blue shirts standing next to him.

Dashcam footage from ambulances parked in front of the construction site also showed Lee walking around while using his phone, and later chatting and sharing betel nut with a fellow construction worker while survivors and paramedics rushed past them.

The images contradicted Lee’s claims of being the only person at the site on Friday morning. “I went to check on the construction alone,” he had told the police on Friday.

Mr Su Chih-wu, a quality control engineer on the site, said there workers should not have been at the site on Friday since it was the first day of a long holiday weekend, The New York Times reported.

While some of the people photographed on the hill later clarified that they were survivors who climbed out of the way, Hualien’s head prosecutor, Ms Yu Hsiu-duan, said on Monday (April 5) that Lee was not being truthful.

“Prosecution now have evidence that Lee Yi-hsiang wasn’t alone (at the construction site) when the crash happened. But we’re still trying to determine who these blue-clad men are,” said Ms Yu at the Hualien Funeral Home.

On Monday evening, she told reporters that prosecutors had subpoenaed at least 10 people who might have been present at the construction site at the time of the crash or who could be related to the case.

Ms Yu also held up a sign to reporters with instructions on how witnesses can contact the Hualien Prosecutors Office, either by phone or through messaging apps.

Emergency personnel have extricated the remains of the last passenger trapped under the wreckage of the island’s worst rail accident in seven decades. He was identified as Mr Chuang Chien-chih, 21, a soldier who boarded the train with a colleague, who survived.

The government said five of the eight train carriages of the Taroko Express have been removed, with the other three expected to be extracted by Tuesday.

Fifty people are confirmed dead after the packed express train carrying almost 500 passengers and crew slammed into the truck near the eastern city of Hualien, causing it to derail and its front end to crumple.

The truck had slid down a sloping road from the building site onto the tracks just outside a tunnel. Officials suspect that the truck’s brakes were not properly applied.

The crash occurred near Qingshui Cliff, an area where mountains rise dramatically from the Pacific Ocean. The difficult terrain has long presented a challenge to transportation engineers, and many accidents have taken place on the winding highway in the area over the years. The rail and highway routes are an essential link between Taipei, the capital, and the east coast.

Local media reported on Monday that Taiwan’s top government officials, including President Tsai Ing-wen, will donate one month’s salary to the victims of the crash.

By : Katherine Wei – THE STRAITS TIMES