KUALA LUMPUR : Malaysian Prime Minister Muhyiddin Yassin’s Perikatan Nasional (PN) coalition and his biggest partner in the government, Umno, have started their respective nationwide tours in the run-up to an election widely expected later this year.

Ahead of PN’s looming break-up with Umno – which accounts for 35 of the 112 lawmakers supporting the government and which has decided to go it alone in national polls – Tan Sri Muhyiddin is expected to hit every state in Malaysia by the year end, drumming up support and gathering more political allies for his nascent yet growing coalition.

He has already stopped by the Borneo states of Sabah and Sarawak, with Sabah’s Liberal Democratic Party (LDP) announcing last month after his visit that it is now planning to join PN.

During his state tours, Mr Muhyiddin will explain the government’s Shared Prosperity Vision 2030 policy that aims to raise incomes. Launched in 2019, it replaced former premier Mahathir Mohamad’s Vision 2020, which failed to meet its goals.

“We will be holding a town-hall meeting in every state across Malaysia. The first state was Sabah last month followed by Sarawak this month,” Minister in the Prime Minister’s Department (Special Functions) Mohd Redzuan Md Yusof told The Straits Times.

Observers say Mr Muhyiddin is taking this opportunity to buttress political support for PN and his Parti Pribumi Bersatu Malaysia. 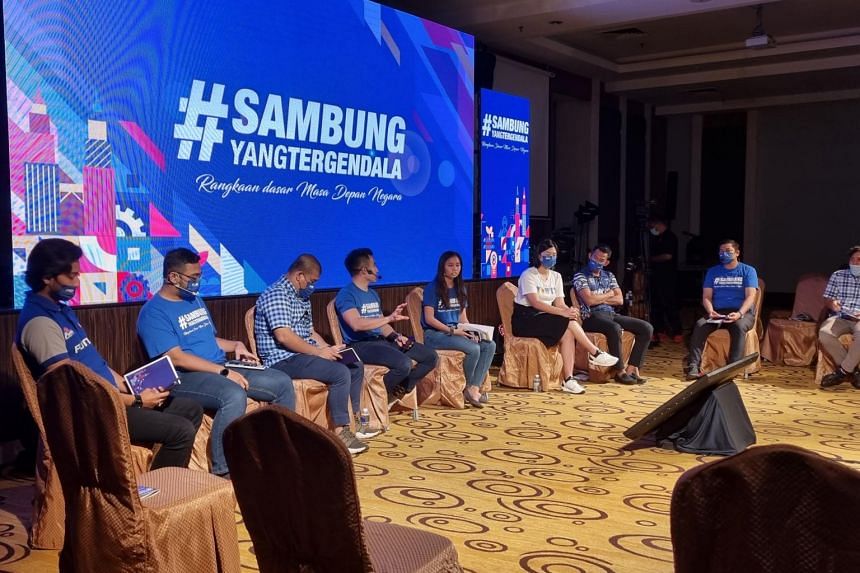 During his two-day visit to the capital of Sarawak last Thursday (April 1), the Prime Minister said PN needs to win a majority in the next general election in order to restore the status of Sabah and Sarawak as equal partners with Peninsular Malaysia – instead of them being mere states in Malaysia – rights which East Malaysia has been fighting for.

“He is using the opportunity to meet leaders of small parties. He is trying to build an alternative coalition, a sort of Barisan Nasional (BN), so he is trying to collect as many parties as possible,” Professor James Chin of the University of Tasmania told ST, referring to the BN coalition that lost control of Parliament to the Pakatan Harapan (PH) coalition in 2018.

The PH government subsequently failed to get the two-thirds majority required to amend Article 1(2) of the federal Constitution, which would define Peninsular Malaysia, Sarawak and Sabah as equal partners in the Malaysian federation.

Meanwhile, Umno, which led the BN coalition, has started a campaign calling for the resumption of nation-building agendas set during its six-decade rule until 2018.

The campaign started just as Umno resolved to break ties with PN for the coming elections – though its representatives remain in Mr Muhyiddin’s Cabinet until an election is called.

Last Saturday, Mr Shahril conducted the first leg of the town-hall sessions in Sungai Siput town in Perak state – a parliamentary constituency that BN has failed to win since 2008 and one of the few constituencies to be equally populated by the country’s three main ethnic groups.

Focusing on youth unemployment, Mr Shahril floated the idea of a state-backed job guarantee scheme to dozens of fellow BN members, leaders and volunteers from the state.

He is expected to propose more of such ideas – such as a living wage subsidy and universal childcare – in subsequent town-hall sessions in other states, though Umno has not specified where the next leg of the campaign will be.

“For six decades, Umno was the backbone of the government and had formulated and implemented policies that developed the country,” said Mr Shahril at the start of his town-hall session in Sungai Siput.

But the political uncertainty that has gripped Malaysia since the 2018 polls – and which has seen two different governments – has caused the country to deviate from the nation-building agendas of the BN era, he said.

He added: “I think Umno understands that it will be difficult for the party to win back urban seats lost in the last general election. Their focus will be on the Malay rural seats and wiping out Bersatu.”

Mr Muhyiddin has said he will call for an election after Malaysia’s state of emergency – imposed to deal with the coronavirus crisis – ends in August.

By : Hazlin Hassan and Ram Anand – THE STRAITS TIMES