Istanbul : Turkey’s Hagia Sophia will open to visitors outside prayer times and its Christian icons will remain, religious officials said Tuesday, after a court ruling paved the way for it to become a mosque. 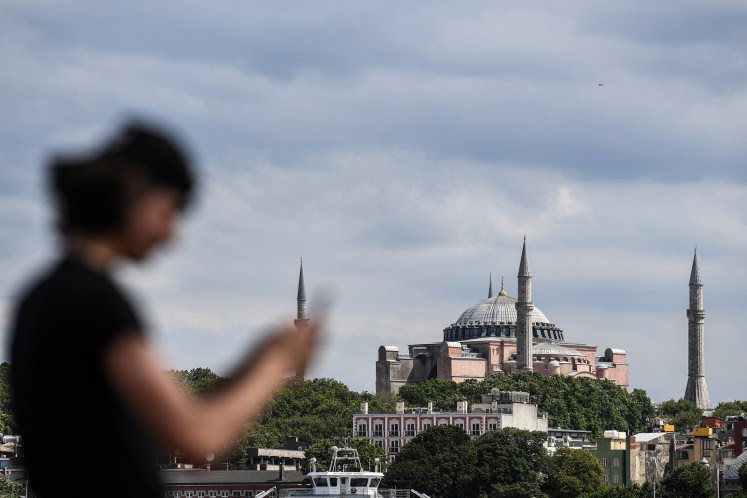 A man stays near the shore of Bosphorus at Karakoy district on July 14, 2020 as Hagia Sophia is seen in the backround in Istanbul. (AFP/Ozan Kose)

The sixth-century Istanbul landmark’s museum status — in place for nearly a century — was revoked on Friday, with control handed to the religious authority Diyanet.

Hagia Sophia was a cathedral for nearly 1,000 years before being converted into a mosque in 1453 and a museum in 1935.

Diyanet said in a statement on Tuesday that the Christian icons in Hagia Sophia were “not an obstacle to the validity of the prayers”.

“The icons should be curtained off and unlit through appropriate means during prayer times,” it said.

“There is no obstacle from a religious perspective to Hagia Sophia Mosque being open to visitors outside prayer times,” the statement added.

Hagia Sophia, a major tourist attraction, has been the scene of Islam-linked activities in recent years. In 2018, President Recep Tayyip Erdogan controversially recited a verse from the Koran in the building.

Erdogan, who said the first Muslim prayers would begin in Hagia Sofia on July 24, has insisted the building will be open to all, including non-Muslims.

In an address to the nation, the Turkish leader promised: “We will preserve Hagia Sophia’s status as a cultural heritage the same as our ancestors did.”

“I want to stress that Hagia Sophia turned into a mosque from a museum, not from a church,” he said.